It’s been a bit of a winding path to success for University of Findlay alumna Terry Laesser ’92. Laesser, a high school science teacher at Melvindale High School in Melvindale, MI, went from being a shy student in her first days as a biology major at University of Findlay to recently being honored as one of ten educators named Amazon Future Engineer Teacher of the Year, an honor, according to Amazon, that goes to “dynamic teachers for their work to inspire students from underserved and historically underrepresented communities to pursue careers in computer science and robotics.”

Amazingly, Laesser said that she made the decision to become an Oiler when she was in the seventh grade. She grew up riding horses in Grosse Ile, MI, and the trainer with whom she worked there learned his craft at the original UF western farm. “That’s all I heard about,” Laesser said, “and I worked with that trainer from sixth grade to my senior year. I might have come down for a visit to UF, but my mind was already made up by then.” She knew that UF was just the sort of small school she was looking for, particularly because she was so shy at that time that her mother worried whether she could handle college at all.

Spoiler alert: she handled it spectacularly.

Laesser felt comfortable as soon as she stepped foot on campus, she said, in part due to the many opportunities made available to students. Seeing as how she was shy, however, it took the welcoming “feel” of campus as a whole, including the kindness and guidance from the people who inhabit it, to nudge her toward involvement. And once she was involved, she was involved. “I played on the women’s soccer team for three years, until my knee couldn’t keep up anymore,” she said. “I was in theatre; I was a part of the UF Singers, Sigma Kappa, all kinds of things.” Helping her along, she noted, was nearly everyone on campus. It didn’t matter if they were bookstore employees, cafeteria workers, housekeeping, coaches or faculty; someone was there to show encouragement. “The kindest, most involved people, all of them,” Laesser added. “Everyone watched out for everyone.”

Her mother encouraged her to teach when she was young, but, in truth, Laesser didn’t see herself as a teacher during her time at UF or even for several years after she graduated with a Bachelor of Science in Biology. Now, however, after two graduate degrees from University of Michigan, 21 years with a teaching career under her belt, and the distinction of being an Amazon Teacher of the Year, it’s fair to say she’s in the right profession. What began as a stint as a long-term substitute teacher in French (Laesser speaks four languages in sum: English, French, Spanish, and Arabic) has been built up to a clear commitment to the students who reap the benefits of her guidance. Laesser currently teaches physical science and advanced placement computer science principles, and coaches the MHS robotics team; and she does so for many students whose families don’t have the resources to meet basic needs. A majority get free and reduced meals. There’s often housing insecurity, and, for the largely Arab American and Hispanic population of whom 75% speak English as a second language, a language barrier. But, not at all surprisingly, according to Laesser, “they’re still knocking their scores out of the park. My students’ scores are higher than state and national average. They learn and grow together. It’s nice that I can even regularly step back and be more of a facilitator.”

Regarding the question of exactly why her students seem to see so much success, Laesser, like all great educators, speaks toward those around her and to the innovations that provide experiential learning. “We have a really good program in the district,” she said. “That’s a big part of it. But a classroom environment that is safe and welcoming is too. I open up my classroom, give students their prompts, allow them time to think, switch it up, ask them to rephrase, tell them they can respond in their native language if they’d like, and use pictures if they have to. If they fail, it’s okay. I even let them see me fail.”

The principal of Melvindale High School, Ryan Vranesich, secretly nominated Laesser for the Amazon award, which included a prize package valued at more than $30,000, with $25,000 to expand computer science and/or robotics education at Melvindale, as well as a $5,000 cash intended to help “celebrate [her] exemplary work with students.” Laesser intends to use the former for, among other things, tools to help her students actually see, perhaps even feel and hold the results of their work. She wants to get them 3D printers and similar equipment so that  they can manufacture what they’re programming. “They’re making apps and that’s cool,” she said, “but it’s just on the screen. I’d like more tangibles. The printers. Drones to teach flight patterns and air traffic control. That kind of thing.”

As far as her own success, Laesser said, she has no reservations about crediting UF with its big hand in helping to form the educator and human being she is today. She shouted out a host of former professors, among them:

“It was like having a family,” Laesser said. “These were people who showed me, even though I wasn’t pursuing becoming a teacher, what it was like to be a good one and go above and beyond. I just learned so much.”

And now it’s Laesser who is setting examples with her own teaching. She said it’s particularly important for females, who only make up less than five percent of the computer science workforce, to see her succeed. “It’s a ‘if she can, then I can’ thing,” Laesser said. And, in a way, that’s what Laesser experienced when under the professors’ guidance at UF. “Whatever I do, I do it with passion,” she added. “The professors showed us that. As Dr. Peck said, ‘Do everything with integrity even if no one is looking.’ That’s what I try to do.” 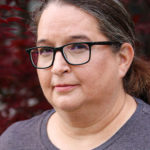