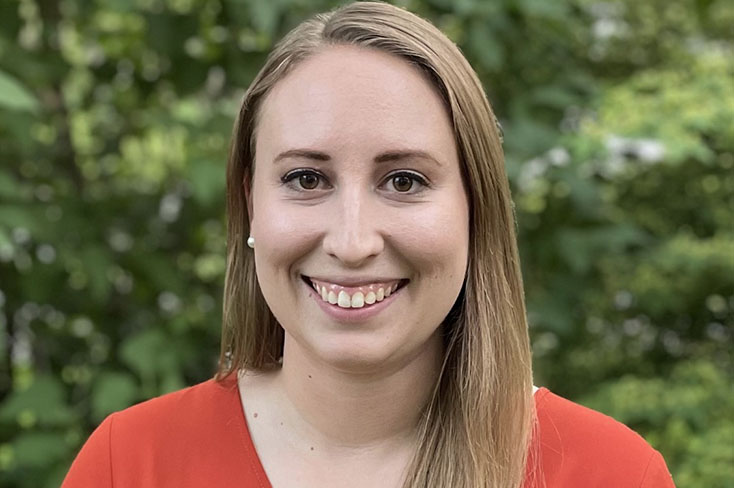 Since her father, Dave Emsweller, University of Findlay’s vice president of student affairs and enrollment management, has been with UF since 1998, Lauren (Emsweller) Sandhu ’13 has virtually grown up an Oiler, save for a few early years when her dad was at different universities. Because of that, it isn’t much of a surprise that she chose to go to college at UF. “I did some scoping out in high school,” Sandhu said. “My parents encouraged me to look around at colleges, and I did.” But, she added, since her father was involved with student affairs, she was around resident directors and resident assistants from UF constantly, and asked them as many questions as she could over the course of her pre-college life. “I loved their answers,” she said. “That and knowing about the biology program more or less did it when it was time for me to decide.”

Wanting the independence that college brought, Sandhu decided to live in the dorms on UF’s campus when she became an official Oiler back in 2009. It took her about a week to settle in, she said, and once classes started, she began to get into rhythm and to solidify her calling. “As soon as my first week of Intro to Biology,” she said. “I was hooked right then.” She had had an interest in science from a young age, nurtured by teachers from grade school to high school, and biology was her natural inclination within it. There were, however, still other decisions to make. “There are a lot of directions to potentially go in science and biology,” Sandhu said. “After a few days of classes, I went up to my biology professor after class and told her that I knew my interest was in biology, but I wasn’t sure where to go from there.” That brief conversation led to undergraduate research in forest ecology with associate professor of biology and director of natural areas and plant collections Dr. Ben Dolan. With Dolan’s assistance, Sandhu began researching the devastating effects that the Emerald Ash Borer was having on the local ash trees on campus and in the area. “I thought about going the animal route with my focus, but once I started doing this work, I knew that was what I wanted,” Sandhu said. “Dr. Dolan saw the excitement and interest when I did the research and worked in the UF greenhouse on campus as an undergrad. I asked a million questions and he was so patient. I was ready to learn as much as possible.” And, as the manager of that greenhouse and UF’s Rieck Center for Habitat Studies for nearly her entire undergraduate tenure, learn she did.

Dolan, also Sandhu’s advisor, helped her with presentations, putting papers together for publishing, identifying a plethora of trees and plants and, perhaps most important to her eventual experience as a graduate student, talking in front of people, which, she said, was one of her biggest fears back then. He had her present at UF’s Symposium for Scholarship and Creativity, and took her to her first college conference, where she continued honing her public speaking skills. “I was just slowly building up my confidence in that and in understanding research,” she explained. “At that point, being any sort of teacher was not a consideration.”

That would change, of course, when Sandhu graduated from UF and went on to graduate school at Miami University of Ohio. “I talked to many professors in those last two years of time at UF about what to do next,” she said. “They told me that grad school was a logical move, but to expect to find an even clearer specialization within biology.” They also told her to expect to either be a teaching or research assistant, and, because she figured she could still do research as a teaching assistant, that’s the path she chose.

Had it not been for those opportunities, those conferences and presentations at UF, what has turned out to be Sandhu’s passion for teaching might not have ever come to fruition. Equipped with an impressive stash of experience from those speaking opportunities, a full breadth of undergraduate education, and a full bag of passion for the subject matter, she began teaching as a graduate teaching assistant while she pursued a Master of Science focused in Botany/Plant Biology from Miami. Sure, she was a bit hesitant, as anyone brand new to anything would be, but she quickly found the confidence that got her there in the first place. “I just got tired of being nervous,” Sandhu said. “And after I got my first round of evaluations, I fell in love with it.” She even found herself using and teaching Geographic Information Systems (GIS) – a method used to display and analyze data as a function of geographic location – a skill that she learned in a geology class at UF. “That came in handy,” she added.

Toward the end of her academic career at Miami, Sandhu was contacted by Sarah Betts. Betts, the executive director of the Seneca County Park District in Ohio, had, in the past, been with the Hancock Park District (HPD) in Findlay, with which Sandhu had an internship in natural resources during her last semester at UF. (“It was amazing,” Sandhu said of the internship.) Betts told her of a job opening for the HPD doing nature-based educational programming as the program specialist, and because of the internship, she was exceptionally competitive; subsequently, she was offered and took the position. “So, I graduated from Miami, came back to Findlay, and started the job and worked on writing my thesis and preparing my defense for it all at once,” Sandhu said.

Not one to be unprepared for the future, as the job with the HPD was part-time, Sandhu contacted Dr. Bethany Henderson-Dean, associate professor and chair of biology at UF. She told her she’d been teaching at Miami, and wondered if there were any way she could even teach at UF, “and it all just kind of fell into place. She said that there were, in fact, classes that I could teach. And I’m still doing it,” Sandhu said. She has been an adjunct instructor of biology at UF since 2015.

For the past two and a half years, Sandhu has been the watershed coordinator for the Blanchard River Watershed Partnership (BRWP), a nonprofit organization which works to improve and maintain water quality throughout the six-county Blanchard River watershed in Northwest Ohio. It is a position, she said, that she felt was “completely out of her wheelhouse” when it became available, being that her focus had always been on plant studies and not so much on soil and water; but both Dolan and Henderson-Dean encouraged her to apply, and, not to their surprise, she got the job. Once again, she found herself immersed in a new opportunity to learn. “In one month,” she said, “I had to learn about water quality and also the non-profit stuff like grant-writing.” It just so happened that there was a three-week grant writing workshop being offered at – you guessed it – UF. “If I hadn’t taken it, I wouldn’t have gotten two major grants,” she said.

Full circle, as part of both the BRWP and the University at which she was raised, both figuratively and literally, Sandhu, in her role as watershed coordinator, as a representative of the ongoing partnership between UF and the BRWP, recently worked again with Dolan to bring a raingarden to UF’s campus. Sandhu worked with students, faculty, biology program staff and the physical plant to secure a grant from the Ohio EPA to make the project a reality. Sandhu, who married her husband Suresh in 2016, calls her life “busy, but awesome,” and her connection to UF and her lineage as an Oiler “just a huge and important part” of everything. “I wouldn’t have my life without it, actually,” she said. “UF has been incredible in a whole bunch of ways going so far back. It is and will always be a really big piece of me.” Communicating Disease and Disability Through Art