Many people are under the mistaken assumption that it’s next to impossible to find someone who is equally both left-brained and right-brained. The University of Findlay knows, however, that balance is key, and that a well-rounded student with a wide breadth of interest is essential to a meaningful life and productive career upon graduating; so when UF turns out alumni like Brandon Buck ‘02 M ‘11, currently a math teacher for Wynford High School in Bucyrus, OH and community member in the UF Symphonic Band, UF Jazz Ensemble, Findlay Civic Band and Findlay Civic Jazz, that assumption gets dispelled. Brandon Buck’s ’02 M ’11 time at University of Findlay saw him playing in many UF bands, including Marching Oiler Brass.

After arriving from Bucyrus – Buck’s hometown and the place to which he returned to make a life after college – he majored in mathematics and adolescent/young adult mathematics education at UF. He became a UF student, he said, after his uncle Randy Buck ’87, a former student-athlete for the Oilers, suggested he take a look at the University. “Once I visited the campus I was hooked,” he said. “Not too big. Far enough from home that I had the independence but close enough for my parents to come.” He said that the education program at UF prepared him effectively for his teaching career, and that the placements he had at area schools helped to widen his experience with different grade levels and subjects. Buck was quick to mention his admiration and respect for UF’s professors and staff, particularly for the late Jim Schmidt, who was a mathematics professor at UF from 2001-2007. “He always had a puzzle or hook for the lesson.” Buck added, “Always helpful with teenage attention spans.”

While the mathematics education program at UF was clearly a major reason for Buck’s choosing to come to the University (“I was always good at math and good with people, so to become a math teacher was somewhat inevitable,” he said.), its music programs and the reputation of former professor of music and director of bands, Jack Taylor, was just as much of a draw. “Music is such a big part of my life,” Buck explained. “My parents encouraged both my sister and me in music. My father played trumpet in school and is an excellent singer. My mother sings and plays piano. Playing trumpet was a way to distinguish myself.” The opportunity to travel to and perform with the marching band in places like Washington D.C. and Severence Hall in Cleveland after being selected to represent Findlay in the Ohio Private College Instrumental Conductors Association helped to broaden Buck’s experience even further.

He was in marching, concert and jazz band for his entire undergraduate academic career at UF, and Buck, since graduation, has continued to drive back to Findlay from Bucyrus almost weekly to perform as a community member in the numerous Findlay bands in which he is a member. That kind of dedication to both performance and those who partake in it alongside him is impressive to many, including Taylor. “It’s a 45-plus minute drive each way to attend weekly two hour rehearsals when we’re preparing for a concert,” he explained. “Brandon does this and has never asked for help or compensation. Often times, Emily [’05, Buck’s wife, whom he met while they were students and bandmates at UF] rides along for an outing. I can count on one hand the number of concerts they’ve missed out on, now over 20 years since both enrolled at UF.” Brandon and his wife Emily ’05, whom he met while students and bandmates at UF.

Recently, Taylor added, Buck went in for hip surgery. “He called to let me know that he’d be having to miss a concert of the Civic Band for this summer and asked for prayers,” Taylor said. “That Wednesday evening – concert night for the Civic Band, now directed by Wes King – Brandon and Emily showed up. Brandon sat in the audience to support the band less than a week after surgery. How special is that?”

Buck returned to UF to earn a graduate degree in education with a technology endorsement ten years ago, and is in his thirteenth year of teaching math at Wynford, along with being the assistant director for the marching band at the school as well as the technical director for its drama productions. It’s that combination of creativity and analytical thinking that forms the whole of many UF graduates, and this, coupled with their drive to achieve, makes alumni like Brandon Buck special. When UF brings people together in common interests, the benefits that come in the form of friends and family along with it are essential. “I didn’t just join the bands at Findlay; I became a member of the family,” he said. “I felt this as a student and it’s why I still come back and play in the bands. This is how Jack Taylor was as a teacher and director, and how Dr. King is continuing Findlay’s band. It’s a sense of community and family.” 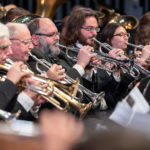